It was a day of impressive performances and wonderful stories, as is ofter the case in the concluding rounds of chess tournaments. Today’s best story involves the talented Liam Vrolijk, who scored his second GM-norm. Not bad for someone who hasn’t even finished high school yet. He’ll be focusing on chess the upcoming year, perhaps even the next two.

Vrolijk, who shared first place last year, is likely to also take first price this year after he crushed GM Alexandr Fier. After 13. Be3

The game was effectively over and Fier resigned a couple of moves later, offering no significant resistance.

Hagen Poetsch joined Vrolijk in the lead. The German GM showed the power of the bishop pair against Lucas van Foreest, truly a model game. After 29. Nf5

After a third win in a row, the Armenian Sargssyan is back in contention for the prizes. He elegantly beat Nikolas Lubbe. We join the game after 28… Qf6

Mary Ann Gomes beat her second GM in a row. Yesterday it was Sergey Tiviakov, today it was Gleizerov. Even though white stands badly in the game

there was no reason yet for the suicidal 37. Rxa6?? which allows 37… Qc8!, a simple double attack threatening mate and the rook on a6, forcing resignation.

In the B-group we saw a weird distribution of material in Slagter – Novotny. After the mess that was the middle game, what remained was a rook for Slagter against Novotny’s five pawns. Could any of those forfill their dream and turn into a queen? Sadly, the answer was no.

Near the end of the game, Novotny had three pawns remaining with two of those being quite threatening for the white position.

The Parisian resident Slagter managed to keep the situation under control and from the diagram position onward, he would have felt safe. White sacrifices a knight for one pawn, blocks the other with his king and later on, he can always walk his own h-pawn down the board.

Was Slagter lucky? “That’s an understatement. Today I managed to win against probably the best chess player in our group”. A solid compliment coming from the 200 point rating favourite.

Two other favourites also met in round 8. Akotchik beat Salihbegovic in a closed French after the black position got opened against the Black king. The deciding error seems to have been 30… Nxc4. The following position arose after 36. Qxc1

Black suffered on for a bit with 36… Qd8 yet had to throw the towel in the ring after 37. Rb5+ Ka8 38. Rxb3. If in doubt why, just compare the comfortabililty white’s King is experiencing to Black’s pain.

The last game to finish was one in the C-group. It’s not only the world’s best who can endlessly play on in the endgame, the lesser gods do share the capacity. Annelies van den Heuvel and the Kazach Tamerlan Baisart drew their game, probably longing for dinner.

Round nine will decide all prizes. We’ll keep you updated! 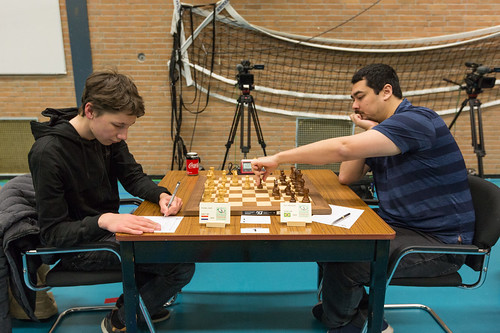