Tough KIDs and An Indian upset

Tough KIDs and An Indian upset

Nicolas Lubbe is playing a great tournament so far with solid draws and multiple victories over numerous Grandmasters.  A surprise in the making? Could the German IM besides his second Grandmaster norm also finish on the 1st place?

When the 7th round finished Lukas . In his game against Liam Vrolijk a Semi-Slav with an early b3 appeared on the board. White probably should have played Nxc6 instead of Rd1. In the game Lubbes had problems developing. After 14…Be6

White won a pawn, while black has chances to challenge the white king in the middle. Black is pressing on the white position, which has besides bad development all kinds of weaknesses. It turned out to be a tough job to defend such a position. Presumably white is already lost, although he is a pawn up, his position is doomed. Black recaptured the pawn soon and the final blow came after 29…Re4!

The white d-pawn is lost. The following moves were played 30.d5 Rd4 31.Be2 Rxd2! 32.Rxa1 Bb5! 33. Re1 Rxa2 34.d6 Kf8 and white resigned. Vrolijk believed white should have sacrificed the e-pawn somewhere during the game to castle and be relieved from black’s pressure.

The sharp opening choice of Lucas could have led to his downfall, but Michael Ulybin made a precious mistake. The move 11…Bb7 seemed to rescue black’s position.

There are just to many threats. After 13…Nf7 Ulybin actually went on with 14.d6?

Black ’s problems are practically over. Survived a murder attempt, while Ulybin managed to get in his typical time trouble, after which Lucas cruised to victory.  “A dangerous player”, as Lucas described his opponent, “but maybe not a practical player.” Where did it go wrong in the opening? “I swapped e6 and g6”. A blessing isn’t, putting Lucas back in the race for the championship.

Alexandr Fier didn’t succeed in winning from co-leader Hagen Poetsch. He was close to win in a better Rook endgame, but in the end it turned out to be a draw. After 53..Rg4

Fier sacrificied his g-pawn, the only way to make progress. The white king is obliged to support the promotion of the b-pawn.

Black was on time: draw.

Sipke Ernst lost to Shant Sargsyan. The Dutch GM snatched a pawn on c3 which the downside the position of his became troublesome. Maybe the idea all along was to exchange the Queen for the bishop and rook and play against a wandering king on f2. Sargsyan calmly manoeuvred his king to e2 and made the queenside his target for the rest of the game. Near move 40 Sipke’s position started to fall apart. Earlier this year in Hoogeveen a long term Queen sacrifice against Schoppen had a favourable ending.

Ernst (from the backside), his opponent Sargsyan and on the background in green Ulybin (Photo: Harry Gielen)

A short reaction from Sipke: “It was indeed a Queen sacrifice, which doesn’t mean it was the right thing to do.”

Evgeny Gleizerov finished the day with a win over Thomas Mollema. He was a piece up and had to convert that advantage to a win against tough opposition, while feeling not so well, as he said later on.  Mollema, who played very well this tournament couldn’t hold it today but nevertheless fought till the end.

The last moves of the game between Alexander Hilverda and Joris Kokje were amusing. It was clear that the white a-pawn would give him the win in this tough KID (we can hear Kortchnoi grinning), but Kokje juggled one more trick on the board.

Not the best day in the career of Sergey Tiviakov (photo: Harry Gielen)

One who is also out of the race for the championship is Sergey Tiviakov. Today he lost to the amazingly strong playing Mary Ann Gomes. In a quiet position and the Indian WGM wasn’t worse, Tiviakov allowed the capture on b5 and didn’t get any compensation.

We have four frontrunners with 5,5 points, who will play eachother in the penultimate round. Vrolijk against Fier, and Poetsch will face Van Foreest. 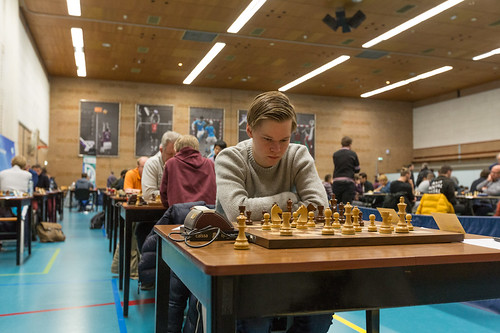