In what is soon turning out to become a modern classic in the Chess Festival, Nick Maatman once again got to face GM Krasenkov with the black pieces. It is their third time playing against each other, with Maatman winning both previous encounters. Krasenkov had the last laugh today, winning the game from a modest Queen’s Gambit where even tiny inaccuracies add up until Maatman’s position became untenable. Revenge is sweet and a dish best served in an incredibly punishing manner. Just take a look at the final position of the game:

All in all, Krasenkov was the happiest with his good start to the tournament. For once, he’s not playing his standard Swiss gambit and he is on a perfect 2/2. Board two saw a complex if not imperfect battle between GM Sargsyan and FM Kollen.

Reigning Dutch champion Lucas van Foreest managed to obtain a small plus out of the Catalan opening and slowly massaged the position with his bishop massively outshining black’s counterpart, perpetuating the claim that opposite coloured bishop middle games are really difficult to defend. Unlike most massages, FM Elgersma could not be seen to be enjoying himself and neither could he save his position or prevent Van Foreest shutting his queen out of the game.

IM De Jong seemed to have a crushing position right out of the opening and could (should?) have won the game on multiple occasions, with Ernst calling his opening play “a nice streak where he missed nearly all of his opponent’s moves”.

After 20. Bd3, which is a tricky defense, if not the best one, De Jong played 20… Nxa4 with the idea 21. Nxa4 Nb4+ 22. axb4 Bxa4 winning material and the game. Ernst instead tried 21. Nb5 and while 21… Nb4+ is still the best move, the winning line is not as obvious to see so instead De Jong went for 21… Nd4 and suddenly found himself in an uncomfortable position, especially after Ernst’s excellent exchange sacrifice. In the end, the grandmaster managed to win however he’ll have to play better in the upcoming rounds if he is to win the tournament.

Wading through the complications in the Grunfeld is not for the faint of heart, and GM Alexandr Fier is definitely not one to be easily scared. FM Kumar’s new move 13. Ne5!? did not come as a surprise and Fier quickly took control of the game.

It is not easy to point out where exactly white’s position became unsavable, but it seems Fier was never worse and he comfortably took home the point after the excellent 22… Bb5!

Another surprise was the first game to finish after the day. It was not necessarily the outcome as IM Beerdsen could expect to defeat the Czech Simet, however he could barely have hoped that he’d be finished after seventeen moves as black. Simet seemed to disregard all opening principles, and like most principles they are to be adhered to. White never got to castle and threw in the towel after it became clear his pieces would never find safe squares and that he was already two pawns down.

The always enterprising Akotchik was probably worse after such a weird move yet his opponent Mark Bloem never found solid squares for his pieces or a plan to continue and after sixteen moves, the position was roughly equal. Akotchik had to fight for the win though, as he was one of the final boards still playing after six. In the end, Bloem could not hold a difficult and Akotchik is on 2/2.

Club and team members Torenbosch and Salihbegovic also missed dinner time after their dogfight ended in a draw. Torenbosch had a winning position after Salibegovic blundered soon after the time control, but could not bring home the full point.

We’ll keep an eye on the B-group in the coming days as the games are always entertaining and remaining favourites will look to pounce on any mistakes made at the top boards. 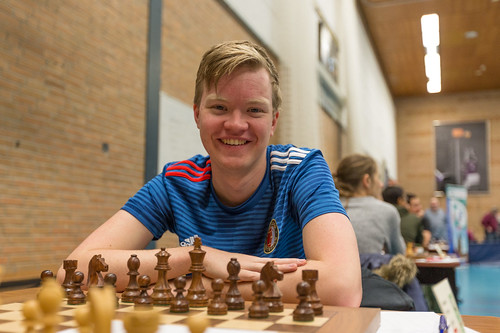