Sipke Ernst got the black pieces against Nikolas Lubbe on the fifth day of the Chess Festival and after twenty moves he was ‘happy and relieved’. For the next few moves, the game seemed calm but beneath the surface, there were some difficult lines to calculate for both players. Black ended up with a weakness on c5 while white had to weaken his king.

In his own words, Ernst said he screwed up. He’d hoped for more after the opening yet he ended up being marginally worse. In the end, the players had to settle for a draw after an endgame with opposite coloured bishops arose.

Ernst claimed it was never dangerous for him; “He’s got the wrong coloured opposite coloured bishop”

Nico Zwirs will find it difficult to come to terms with today’s outcome after he completely outplayed Krasenkow, could have made a draw and eventually lost. We enter the game after black’s tricky try 22… d5

After the clever 23. Bh3!, an idea which always seemed to return in the analysis of this game, white would have been much better after the complications regarding 23… dxe4 24. Nxe4! Even in the game after 23. Rxf7 dxe4 white can draw after 24. Rxg7+ Kh8 25. Rff7 however after 24. Nxe4 Bxe4 25. Qxe4 Rd2! the tables have turned. Black is winning, and although a lot happened afterwards, black managed to win. With the black pieces Krasenkow is willing to risk a lot to score points, and it seems to be paying off.

The baseline duel between Tiviakov and Vrolijk ended as a draw which was not completely unexpected. Tivi tried to squeeze water from stone, however ended up conceding the draw after 64 relatively unexciting moves compared to the surrouding boards.

Time scramble addict Ulybin had created a wonderful position against Sargsyan and in a Grünfeld, he expertly sacrificed on g6:

20 Nxg6! Rxc4 (else 20… Kxg6 21. Qxc2+!) 21. Nxf8+ Kg8 22. Ne6 and white had won a healty pawn. He survived the long-lasting, traditional time scramble and then he had to win the endgame, which he expertly did. The Russian grandmaster can be satisfied and Sargsyan will be disappointed with a game in which he never really got any chances.

There are some days where you’d like to report on every move on every board and this was one of them. We’d not really paid attention to Lucas van Foreest’s game against WIM Varshini until it suddenly was over. The Indian had tried to punish Lucas’ Caro-Kann and overpushed after which Lucas finished off the Swiss cheese that remained of white’s game.

Some players always seem to meet, no matter where they go. Nick Maatman and Ivo Maris are two of those players who have clashed since they were young. Nick’s positional, decent style contrasts Ivo’s craziness and it was no surprise that Maatman chose a solid opening with an early queen exchange. Maatman did not really manage to get anything out of the opening and the game ended in an easy draw.

The B-group seems to be Akotchik’s to lose. After winning his fifth game on the trot, he is solidly ahead of the chasing pack. Of further educational value is Roger Labruyere’s game against Daan Noorderbos. An early exchange sacrifice led to more than enough compensation and long lasting pressure against the black king. Noorderbos long resisted but in the end faltered and had to resign after a single blunder which ended up costing him a rook. Chess can be a rough game.

In round six, Labruyere will meet Kenneth Muller who managed to beat Dolf Wissmann. Novotny will play Akotchik. Novotny is the only one within half a point of the leader, so this may be the deciding clash already.

In our reports we seem to have all but forgotten about the C-group. This year’s tournament is, as nearly always, a coming together of older chess players and younger talents who haven’t yet progressed to the B-group. The talented young kids come from all over the world, from China’s Zimo Qi to the Kazach Tamerlan Baisart, who solidly drew their game against each other today. Of course, there’s always homegrown rising stars, such as Leon Niemeijer. He had had an excellent tournament thus far, even though he lost against the older and favourite Annelies van den Heuvel today. The master seems to be holding their own against the students this far into the tournament.

The Compact groups also began today, albeit with a strange participant: Vojta Plat. He’d intended to join the A-group but had to play some game in the Italian competition which clashed with this tournament’s schedule. He ended up traveling to Groningen to join up with his friends.

And being here anyways, he might as well play a few games. Being a rating favourite of about 400 points, this reporter would be very surprised should he not manage 5/5 this year. His closes opponent would be Udo Hagenbach (2161 FIDE). In any case, Plat won today’s game easily within 30 moves, letting Martijn Hardebach know how it is to play against someone this strong.

We will join you again tomorrow after a very entertaining round on Boxing day. Let’s see what tomorrow’s games can bring to match today. 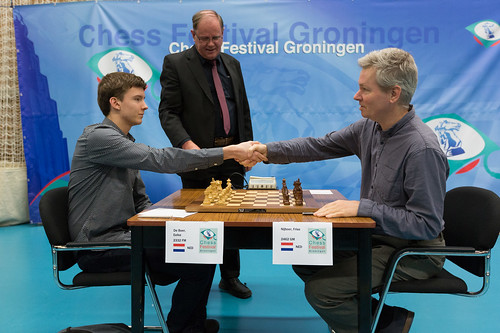 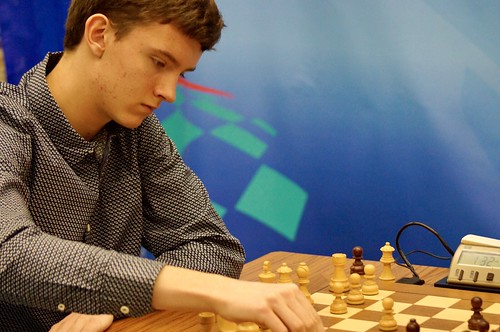 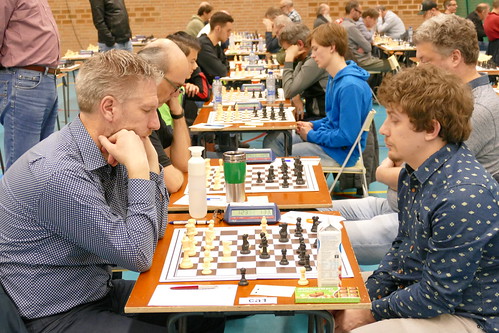