After today’s fourth round, Sipke Ernst is the only player to be on 4/4 after winning a Catalan against Thomas Beerdsen. Beerdsen had black and was perhaps was a bit too careless out of the opening. After 13… Nxe4, black’s position is already quite difficult to defend and white could have chosen either 19. Be4 or 19. Rd7.

Having been trained by Sergey Tiviakov for years, the games between Tivi and Lucas van Foreest are always exciting. ‘Tivi’ did not appreciate Lucas’ efforts and that is not really surprising coming from a former pupil of the Sovjet school. This game saw a Nimzo-Indian with 9… Qd6, where some predecessors saw 9… Qc6.

After the trade of queens, little seemed to be happening on the board and yet with the bishop pair, white could perhaps create some chances in the endgame. 28. Nd4 seemed a good start however Lucas did not press the matter and a quick draw was agreed.

Some days you’d wish you hadn’t gotten out of bed and certainly Guije Zhou would have felt this way after today’s game.

Playing inaccurately from early on, she was mated in barely twenty moves. The final sequence is one for future tactics books:

Alexander Fier’s game also did not last very long. “Complete rubbish” the Brazilian GM complained after the game. “I just blundered the exchange with 13… d5 and after that, I just tried to create some mess”

It turns out that grandmasters are quite capable in creating a mess. Blitzing out his moves much like the SISSA Christmas Blitz the evening before (which he won without losing even one of his 23 games), his queen found her way into the white camp. This caused mayhem and eventual resignation. Fier bounced back after losing against Lubbe in round 3.

Lubbe, by the way, won against his second GM-opponent in a row. Not bad for the German IM, who is chasing his second norm. Against GM Hagen Poetsch, Lubbe had to win a two rook against rook, knight and bishop. Normally speaking, that would be advantageous for the minor pieces, however Lubbe showed that two coordinated rooks can be very dangerous indeed.

He kept constant pressure on Poetsch and after 26… exd5? white had some targets to aim for. A very good game by IM Lubbe, and one with replay value for the learning audience.

Sargsyan went to the wire against Nico Zwirs however the Apeldoorn resident kept his cool and saved the draw with relatively little effort. The secret to these types of endgames is to play actively and quickly. Do not overthink! During the final moves, Sargsyan had gone down to his final minute and after many repetitions, white agreed to the draw after 57… Kg7.

In the B-group, the bigger names are starting to separate themselves from the pack. Victor Akotchik won without breaking a sweat and Ruben Slagter beat the Danish talent John Cristop Christensen.

Edim Salihbegovic did have issues beating Max Neuendorf. The former missed various moves in the middle game and then needed an endgame trick.

Kenneth Muller is building the Swiss Gambit’s reputation. After losing in round one, he scored 3/3 in the following games going into the Christmas rest day. Other noticable performances thus far include: Leon de Vries, David Novotny, Feline Waardenburg, Jorn Torenbosch and Peter Bosker. With this many possible winners, this reporter is not daring to make any sort of prediction regarding the outcome.

Regarding the mini groups, we will just name all winners. The first group was won by Rieks Taal. The B-group saw Loek van der Hagen beat all his opponents.

The C-group was won by Menno van ‘t Veld. The D-group was easy peasy for Thomas Manschot. Shared first place in the E-group was for Nanne van Foreest and Dana Verheij, the same applied for the F-group, which saw Jaap van der Graaf and Al-Hanan Yaser Alabed share the first prize.

The G-group, too, had two winners: Nanno Rijnders and Daan Hubers. In the only group of six people, Menno Keizer beat out everyone to win. And finally, Ichelle Dekker gets to go home for Christmas: she won the I-group. 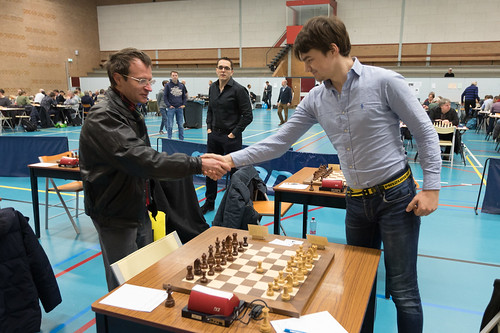