A little panic and an Armenian duo

A little panic and an Armenian duo

Game of the day must be the first board encounter between Hagen Poetsch and Liam Vrolijk. Before we dive in, here’s the result in case you might have missed out until now. Vrolijk has won the tournament. He came to a total of seven points, as did Poetsch and Sargsyan. On account of his opponents’ strengths Vrolijk finished as the official winner, and will take a place in our Hall of fame as the victor of this 57th edition of the Chess Festival in Groningen. And deservedly so, considering the young (17 years old) GM never lost a game in nine rounds. Sargsyan is officially second, Poetsch had to settle for third. On a side note: all three players on top share the same prizemoney.

Last year, Vrolijk also won the the tournament, alongside Ladva, but saw the latter claim his place in the Hall of fame. This year his tournament actually was already a success after the penultimate round, because of his second GM-norm. In response to the question which was dearer to him, the tournament victory, or his GM-norm, Liam hesitantly opted for the GM-norm. And we understand his feelings, however, when later questioned upon hís feelings, Poetsch called the shared victory the best result in his career so far.

In the final round, the seventeen year old pulled out a surpise Najdorf. Not frequently observed in his public repertoire, but studied quite a lot in recent months, this seemed a nice occasion to Vrolijk to let the Najdorf out of the bag.

As seen before so many times in this sharp lines of the Najdorf, fast draws seem the most unlikely result. Poets went all in towards the black king, in one of the modern mainlines in which white sacrifices a rook for a knight, in exchange for some heavy pressure on the black position.

Funfact: this is the exact same dazzling line played last year in a done and dusted draw between …Schoppen and Vrolijk. However, Poetsch diverges from that game, and we come into the position after 12. … b5:

and here we leave the trodden paths. The database reveals one game that continued 16…0-0 after which 17.Be7 Re8 18.Nc6 Qb7 19.Nd8 Rxd8 20.Bxd8 was an option. However, no agreed result, but a sharp battle for the tournament victory.

Unexpectedly in these attacking lines, sometimes a draw comes looking around the corner, and in this game white could have forced the draw with 21.Qa3. Poetsch dismissed the ‘opportunity’, and decided in stead on 21. Be2. One might deem this courageous, but in fact it is not easy for black to find his way out of white’s positional hold. 21…0-0? fails to 22.Ne7+ and 23.Qxd7 and after 21…Bxd5 22.Qxd5 g5 23.Bg3 black’s hand and feet are tied. Position after 21.Be2:

Vrolijk went for 21…Ta7 and Poetsch continued with 22.Rd1. Black’s reply 22…Ba8 is a suspiciously slow move for these kind of sharp positions. White built up pressure with th move  23.Bg4 which provoked black to fleeing with his king 23…Kf8. Very strong would have been 24.Da3+! considering after 24…Kg8 25.Ne7+ Kh7 26.Nac6 the black position collapses. But in stead of 24.Da3+! white played 24.Bf2 and now with 24…Nf6! black has suddenly done some damage control, is still alive and very much in the game…

In the end, it came to a remarkable finish between the two combattants. The nerves finally got the better of maybe both players, and after his missed opportunity (24. Qa3+) Poetsch acknowledged the strength of 24…Nf6!

He therefore, in a slight panic, offered a draw accompanying his move 25.Qa3+. After all the saddening lines he went through this game already, Vrolijk accepted without any hesitation, and probably did so with a feeling of great relief. And this was confirmed by Liam in his interview afterwards. He lacked conviction today, and was happy to accept the draw. Objectively, black has already turned the position around, and could have played for a result. But who are we to complain after such an exciting final round game for first place!

Armenian duo Shant Sargsyan and Artur Davtyan scored two for two in the final round. Sargsyan capitalized on his fine position against this tournament’s surprise, Indian WGM Mary Ann Gomes, and in doing so joined the lead with Vrolijk and Poetsch. He managed to derail Gomes’s game with small annoying moves. After the confusing 21…Bd3

white’s 22.exd3 was a mistake (a better move would have been 22.Rd1) and now black looked at a confortable position. Not long after the Armenian GM came up with another subtle move. After 26.Rhe1

he played 26…Ne4+! and white responded 27.Rxe4 dxe4 28.Bxe4, giving her rook for a knight. A fine display of his technical ability proved to be enough to win this game. When Sargsyan managed to start moving his pawns, the game came to a quick finish. After 58. …h3 Gomes threw in the towel.

IM Davtyan missed the opportunity to win quickly just before the 40th move in his game against Sipke Ernst. White’s two bishops were killing, and Ernst started a long and uninspired ‘kingwalk’. After 38…Kh4

Alexandr Fier lost in the final round to Mikhail Ulybin. The Brazilian GM clearly hadn’t completely recovered from his crushing defeat against Vrolijk. After 19 moves we saw a well-known position from the Panov-variation in the Caro-Kann:

Chess theory is clear on this position: white wins, or black draws. Fier, however, managed to lose this position in no time, playing white! His play was unrecognizable: a dramatically bad finish to the tournament by one of the heros of the first rounds here in Groningen.

Youngsters Lucas van Foreest and Thomas Beerdsen found themselves out of contention for first place. They did take home the price for being the last active game of the tournament. Beerdsen at one time played with four pawns for his ‘sacrificed’ piece, but after a while only one of them survived. Could that be enough to ‘win’ the draw?. The position after 41…Rh3:

In the end white played with rook and bishop against rook. The current Dutch champion Van Foreest put some long lasting and annoying pressure on the talented IM Beerdsen, and finally, after 107 moves, could claim victory. A well deserved point to finish an altogether not too satisfying tournament for the hometown favorite.

To conclude this days game reviews we look at Nikolas Lubbe’s loss to Sergey Tiviakov. The sympathetic German IM Lubbe seemed to be well on his way to score a GM-norm after round 6, but somehow tilted and lost three consecutive games to return eastward empty handed.

His opponent, local chess giant ‘Tivi’, though relieved to have won this last round in his hometown tournament, will walk home bitterly disappointed. After the surprise defeat against Gomes in round 7 he had lost sight of winning the tournament. To win his last two games must have felt to him as the least he expected from himself as a professional chessplayer. And so he did.

Any other spectacular feats in the Open A? Not really. Grutter played a fine tournament, but missed out of an IM-norm when he lost to GM Krasenkow in the 9th round. A decent enough game though, if we forget about the result for a moment.

Machteld van Foreest couldn’t convince on this level yet (as she will shurely be doing in the near future), as couldn’t Jonas Hilwerda, Groningen’s other great talent in the Open A. Finally Gertjan Haan’s performance cannot go unnoticed. Last year’s winner of the Open B tournament entered the Open A as a sitting ELO-duck, ready to be taken out by the buckshots fired upon his sorry feathery limbs. Collecting 4 points he exceeded all but his own expectations. And in doing so drew no less than four titled players. Unfortunately for him, no special prizes are awarded for this.

Group B did see some quick draws. Board one lasted a mere eight moves, and with it all excitement for the first prize disappeared. Akotchik ensured his first place, with only the second board having the chance to match him. Slagter explained his quick draw offer: “I’m exhausted. Had he played a Scandinavian or Sicilian I might have gone for it”.

Aktochik had to hope for a draw on board two between the young Novotny and Leon de Vries. This did not happen when the Czech player unexpectedly lost the game. Leon de Vries thus shares first prize while only playing chess for two years!

Novotny can also be satisfied with his play and to call him underrated would be an understatement. According to Slagter, Novotny is clearly the best player in the B-group. With 6,5/9, the Czech youngster had fifth place for himself and although he might have loved that result beforehand, he’ll probably go home slightly disappointed.

Slagter and the old but gold Uwe Ritter shared third place with seven points. Ritter did not draw a single game in the tournament losing only to Feline Waardenburg and Jorn Torenbosch. We wouldn’t be surprised to see Novotny in the A-group next year.

Life of a chess player can be rough, it transpires. In an equal position against Edim Salihbegovic Arthur de Winter blundered a full rook. He immediately saw what he had done, buried his head in his hands and resigned. A good tournament ended on a sad note, while Salihbegovic had had a bad tournament but could be glad to receive an extra half point.

Closing off the B-group, we saw the Roger Labruyere really understands the game of chess. Lots of enthusiasm and lovely finishes from the promising youngster who, we’re certain, will become a lot better over the upcoming years.

Compact A had one favourite, and a massive one at that. Czech GM Vojta Plat had the group at his begging, blitzing out suboptimal openings only to outplay one opponent after another. But he doesn’t know Simon Elgersma yet. The Econometrics student hasn’t played badly over the last couple of months but just could not win his games.

Well, he did today. Not just the result but his level of play was outstanding in this game. Pham Koi and Guy Bielderman had to share the second place together with Vojta Plat and Enrico Vroombout.

It’s a poor result for Plat who had more than four hundred rating points more than Simon Elgersma.

That concludes our (somewhat delayed) coverage of the yearly Groningen Chess Festival and we’re hoping to see you all again next year. 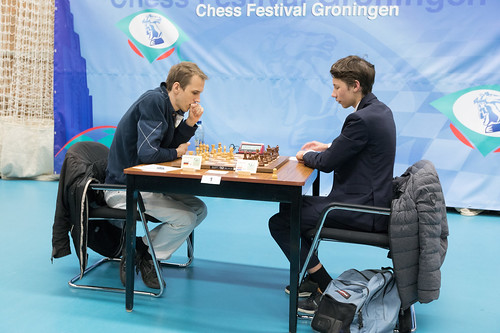 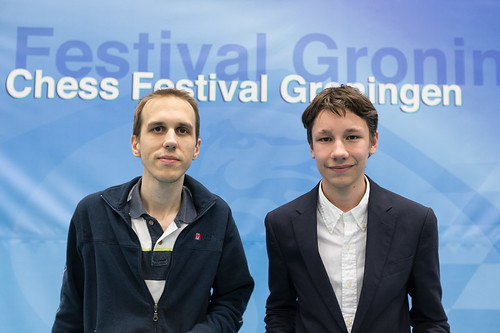