God’s punishment: Thy will be done!

On a very hot summer day in 2004 the jumbo-sized BMW of local patron Kees Eldering, was ready to leave for the Jacobijner church in Leeuwarden. In the boot of the car a crate Buxton mineral water. If you race at illegal speed in that direction, the water in the radiator can start boiling and you should not fill it up with any ordinary tap water. The diva-like works of art created the Bayeriische Motor Werke would hate that. So, after a photo shoot with his girlfriend Kees was off to Leeuwarden.

Over there his protege was playing in the Dutch chesschampionship and as a warm up the Harmonie tournament. And who did my drooping eye spot there? None other than Lambertus van der Marel,proprietor of Atlantis, the chess players’ pub. And who was sitting on the board beside him? The well known German player, woman-phobic Walther B. A nice moment for a little experiment: Why not ask the girlfriend of Kees to take a closer look at the position of Lambertus, who always plays like a daredevil… With amazing effect: as stung by a viper he disappeared behind the pulpit.

Four time Dutch champion Loek was the one who played against Yge Visser, the protege of Kees. Dressed in a snow white shirt he was obviously praying:

The eyes of God are not what they used used te be and the Lord assumed Yge Visser was an altar boy, answered his prayer, and indeed forced Loek to play Pxc5 (see diagram and moves). God saw that combination as well (he sees everythign after all), but why not 38…Le2 instead of Kg7??? Even with my bad eyes I can see that, but let me put on my glasses. What do we have here, no altar boy at all. It is that punk from The Hague, who spends all his money on the one armed bandit and gives not a single penny to the church collection plate. And what is written on his back? Hotel.nl! Must be some advertisement, forbidden in My House. You know what? I will turn that punk into a pillar of salt. But Saint Peter guessed the the thoughts of God and said: Please, we are much too busy today to bother with this… Well, ok, just for a moment then, that will teach that punk! And that is why Yge became literally petrified, so his last seconds passed and he lost on time. But ironically Loek had not only God to thank for this gift, but Yge as well. 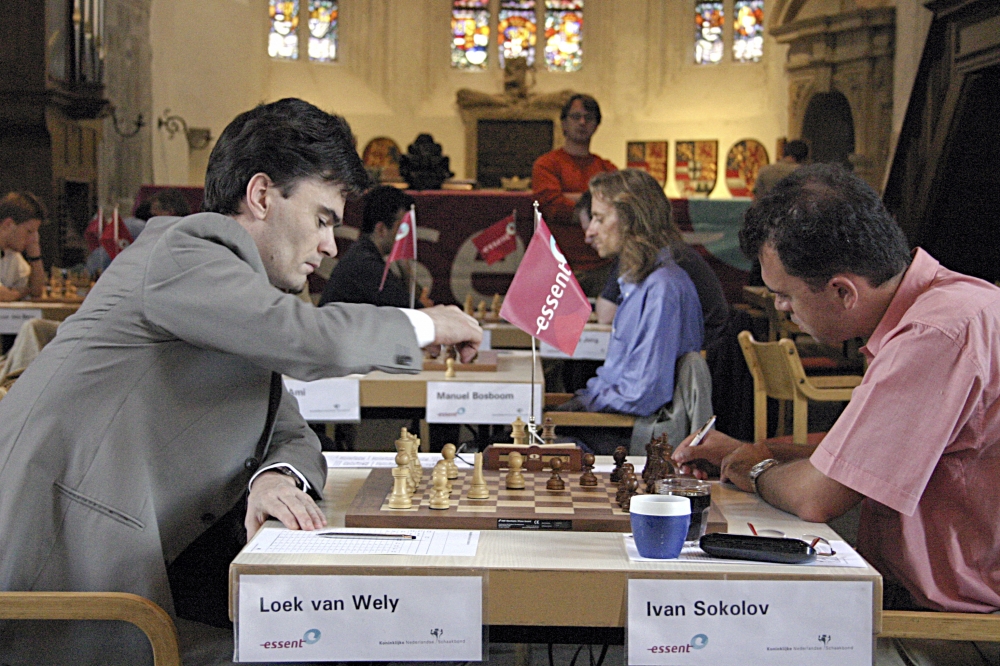 Not being turned into a pillar of salt enabled Yge to draw against Ivan Sokolov (but maybe that was God’s work too). And this is how the title went to Loek van Wely once again again.

Jacques Jambon will produce an image column on a daily basis during the Chess Festival, where text and pictures will give you a surprising vision of the chess world, in his own words and through the eyes of a person who has seen it all (and may make you feel the same). He does not sit on the fence, run with the hare and hunt with the hounds. He manages to combine a romantic style with an eye for the painful truth about that twilight world, where grandmasters and patzers meet. Jambon is not only a chessplayer but also erstwhile reporter for the Nieuwsblad van het Noorden (a northern newspaper), anarchistic enemy of the state, goal- and, barkeeper, poet,-fashion icon, (the list goes on).

Important to know: the reflections of Ham are not automatically shared by the tournament organization. The organizers tried their very best to contact the photographers and ask permission for using their pictures. If necessary, please contact us.

Photo’s in the church: Bas Beekhuizen

God’s punishment: Thy will be done!

Terror Jaap and the Grandmasters

That guy cannot be trusted